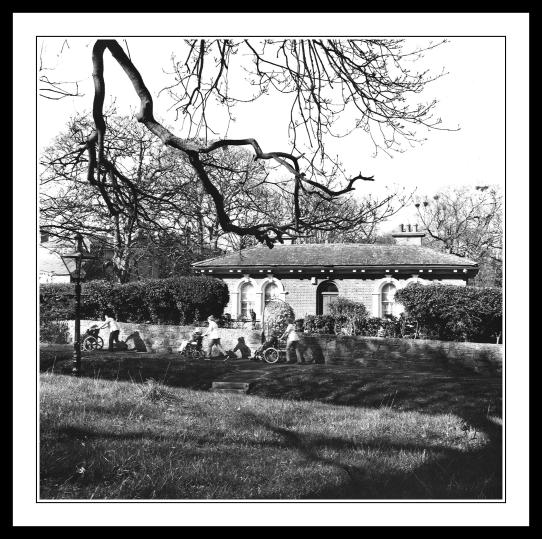 Ok, so this is a recent film shot of a rather beautiful lodge in the park called Hibernian Cottage. The house is situated just at the entrance gates to St. Mary’s Hospital which was originally the Hibernian Asylum or the Royal Hibernian Military School as it was later renamed. The Hibernian Asylum was original built to help orphaned children of soldiers who had fallen during the war and was then extended to cover the needs of destitute families of soldiers leaving Ireland for services overseas.
This lodge has for many years given me so much trouble to photograph that any sane person would have given up at this stage. The big problem with trying to get a really good photograph of this lodge would be the fact that you can’t really see that much of it from across the road. Normally I would just get a little closer but that is not really a solution in this scenario. My only other option was to cut down all the hedges at the dead of night and hope that nobody caught me, but cutting down trees as you may well know is not really my style now is it. So I would try going back at different times of the day and even different times of the year to see what I could do to capture this really beautiful lodge on film.
Right, so there I am with some really lovely long shadows beginning to appear on an early summers morning, the branches above me making that lovely x like shape on the grass in the foreground. I must admit at this stage I was really beginning to feel good about this one. I spent a while walking around from side to side to just get the best angle of the lodge and the shadows. Once I had decided on an angle that I was happy with I got the camera all set up and made all my little adjustments. By the time I was all ready to go when this delivery van arrives and proceeds to stop right in the centre of my shot, to be honest I think the driver was on his phone but he sat there in my photograph for at least ten minutes. By the time he decided to move on and go on his way this scene you see in the photograph had pretty much miraculously appeared. The ladies in their wheelchairs and their carers had stopped off at the gates of the lodge to pick some flowers from around the gateway. I rattled off as many shots as the camera could handle before they all walked away and everything was back to normal. This was my favourite of them all. I really like the sense of movement that the girl in the middle conveys. I must admit that something as simple as the shadows on the wall really make me love this photo above the rest in the series.

The print was made using my very own bare hands in a traditional darkroom.

To purchase a signed 10 x 10 inch print of this photo, just click the button below.

You can either pay directly via paypal or with your own credit card. Don’t worry if you don’t have a Paypal account, you don’t actually need one to simply pay with your credit card.

The Prints are €25.00 each and that includes shipping to anywhere in the world. Your print will be made to order and will ship out within 48 hours.
If you would like a bigger or smaller size please don’t hesitate to email me with your requests.